Already in August 2019 Amor started his career as a daughter tested Brown Swiss bull. Meanwhile, 118 daughters have been scored by Amor and 258 daughters with test milking have added to his sire proofs. They could confirm or even increase the values for the most part. Since last year AMOR could also increase the feet&legs (111) and the fitness traits (113) significantly. His high willingness to perform (+1,076 kg milk) combined with the logevity (118), persistence (119) and udder health (113) oh his daughters make Amor an interesting mating bull in the brown Swiss population. The udders of the Amor daughters show a strong central ligament (108), a good fore udder length (112) with wide and high rear udders. The slightly longer strokes (108) are ideally placed. Despite his calving index, which should be taken into account, his calves show a very good vitality on the farms (vitality index 113)

Amor unifies interesting and powerful Brown Swiss bloodlines with the combination Anibal x Huray x Dynamit in his pedigree. His dam Debora also proves the willingness to perform and can now impress with an av. performance of 11.291kg milk with meanwhile 6 calves. His granddam Diana convinced already in 2011 at the jubilee animal show of the Weilheim breeding associations with her perfect foundation and her lively udder. Also the first Amor daughters on the farms attract attention with their performance but as well their well textured, tight udders and the ideally placed, slightly longer teats.

To the breeding values of our Brown Swiss bull ⇒ AMOR... 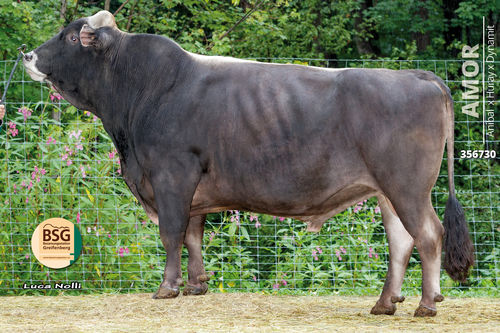