The April sire proof run for Fleckvieh introduces numerous innovations. The introduction of the single-step method can be described as a milestone, as all genotyping and performance information is now processed in one system and, due to the increased information content, the reliability of the reported breeding values increases.

Much movement in the top lists

Like every change in the breeding value estimation, this one is also accompanied by a shift in the top lists, which breeders and farmers have to deal with. The purchasing strategy followed by the Greifenberg insemination station for decades, in which the performance and conformation of the cow families, the line management in connection with the genomic breeding values have a particularly high priority, also proves itself in the single-step age. And so, together with our partners, we can look back on a top-class line-up that meets all breeders' wishes.

With already more than 100 calved daughters as well as 55 daughters with conformation evaluation, the well-known Mint-son MINOR (TMI 132, +3) enters the ranking of progeny-tested bulls. Bred from the well-known L-line of the Mayr Josef farm in Uffing, he can be described as a fitness giant (FIT 129) with a medium milk volume ratio and positive components. Especially in udder health (130) and fertility (118) Minor is unrivalled. In conformation, Minor lets us expect medium-framed, balanced daughters with rather sloping pelvises. In the feet&legs inheritance of strong 122 points especially the optimal hock angle and the dry expression (117) stand out clearly positive. The udders of the Minor daughters meet the requirements of all milking systems. With little volume in the udder body, held by a strong central ligament, Minor promises not only healthy but also functional and above all durable udders, with somewhat longer and thicker strokes. Considering the tight milkability, Minor is an all-rounder which is also suitable for heifer insemination.

Epinal x Passion x Resolut x Wal is the alternative pedigree of the performance sire EPSON, who comes up with +1075kg ZW-milk with scarcer ingredients. Already in the run-up his large-framed daughters attracted attention with high performances and strong conformation. Despite the high yields, the Epson daughters show small-volume, firmly attached udders with somewhat thicker lines, as well as outstanding texture and veining. But also in the fitness traits Epson can score with a top daughter fertility (118) and a flat lactation curve (Pers 111).
With his TMI of 121 points with 85 calved daughters, Epson does not rank at the top of the progeny tested Fleckvieh bulls, but is definitely worth a second look due to the lines and the look of his daughters.

Already almost 2,500 calved daughters ensure the outstanding performance of MANOLO Pp*, who continues to set the tone among the polled Fleckvieh sires. His large-framed, dual-purpose daughters inspire far beyond the German borders with their perfect feet&legs (134) and udders (115). With the easy calvings (115) despite strong capacity inheritance, the high milk quantity inheritance (+876kg index-milk) and the outstanding udder health (121) Manolo Pp* is indispensable for Fleckvieh breeding.

With VERMEER, another popular BSG Fleckvieh sire confirms his excellent breeding values also with Single-Step. Already 575 daughters have completed their second lactation with 8,608kg milk at 4.11% fat and 3.64% protein. They are already 400kg above the herd level!

Dual-purpose specialist HOOD also convinces with stable breeding values and is developing into the most complete of all Hutera sons. He is the embodiment of dual-purpose (FW 122, ZW milk +665kg) and inspires with excellent calf quality and daughters with strong type, which more than satisfy their owners.

The line-alternative newcomers of the December 2020 sire proof run IMERO and WOB also show a positive development and convince in terms of willingness to perform, conformation and fitness. With a udder breeding value of 141, Manigo's son MAGIER remains the strongest uddered Fleckvieh bull in the population. But the udders of the Magier daughters are not only beautiful, but also healthy, which is shown by the udder health of 126 points. 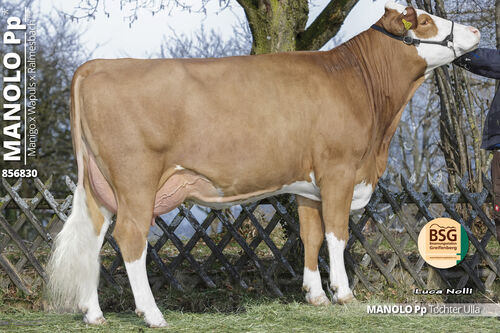 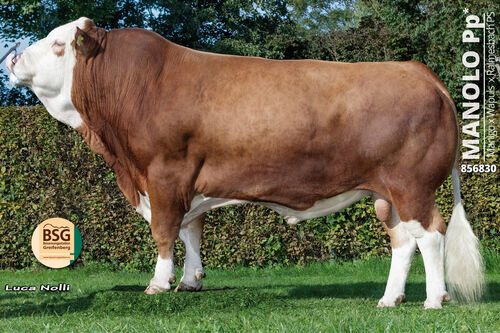 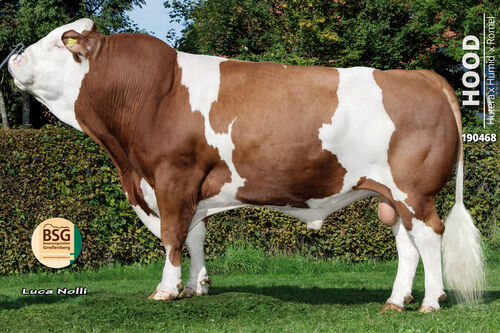 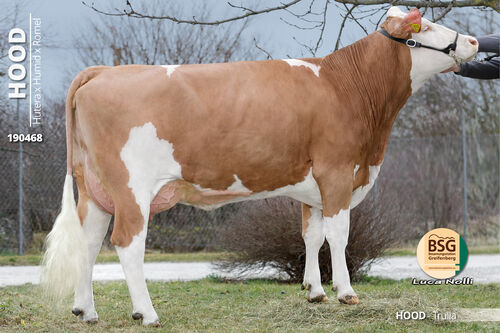 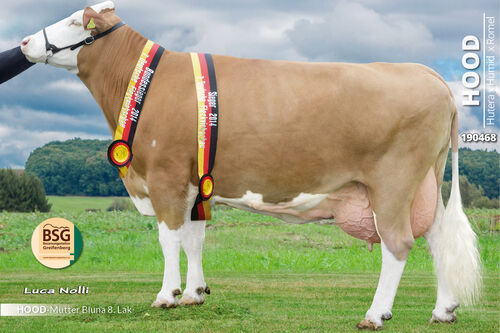 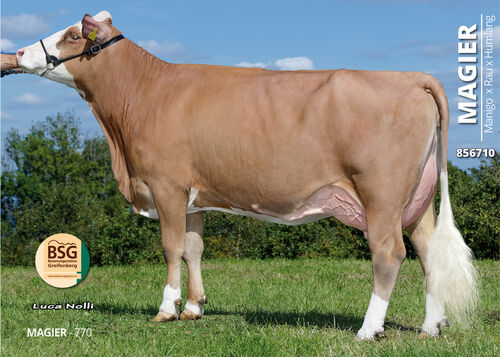 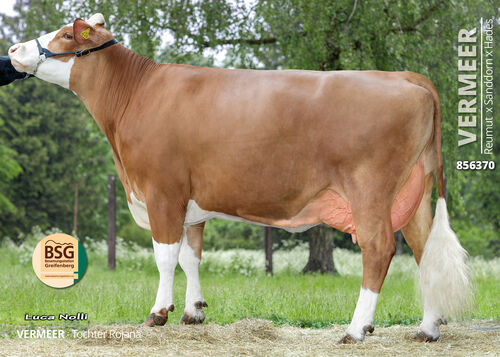 In the polled Fleckvieh progtramme the offer is broader than ever. No less than 12 naturally polled bulls enrich the young sire offer, five of which are even purebred polled.

One of the most homozygous polled Fleckvieh bull in type is the Watango Pp*-son WONKA PP*. Bred out of the enormously large-framed, feet-strong Mahango Pp*-daughter Baskia Pp*, Wonka PP* is also expected to produce large-framed, full-bodied cows with small-volume, high-set udders. Wonka PP* can be used to balance out cows with too short and thin lines. Wonka PP* offers the rare combination of healthy udders and good milking spee.

VOTANGO PP* from an organic farm has proven its suitability for heifer insemination. Homozygous polled in combination with strong type breeding values and high willingness to perform, that is what the enormously well developed young bull MEGAWATT PP* promises. With the bloodline Mineral Pp* x Wattking x Rumgo x Marino he is also extremely line-alternative bred, which makes a very broad use in the hornless sector possible. The cow family around Megawatt PP*-dam China Pp* presents itself enormously uniform, willing to perform as well as exterieur strong, which is also reflected in the breeding values of Megawatt PP*. Bodied, strong developing cows with long udders and a correct teat development can be expected from him. 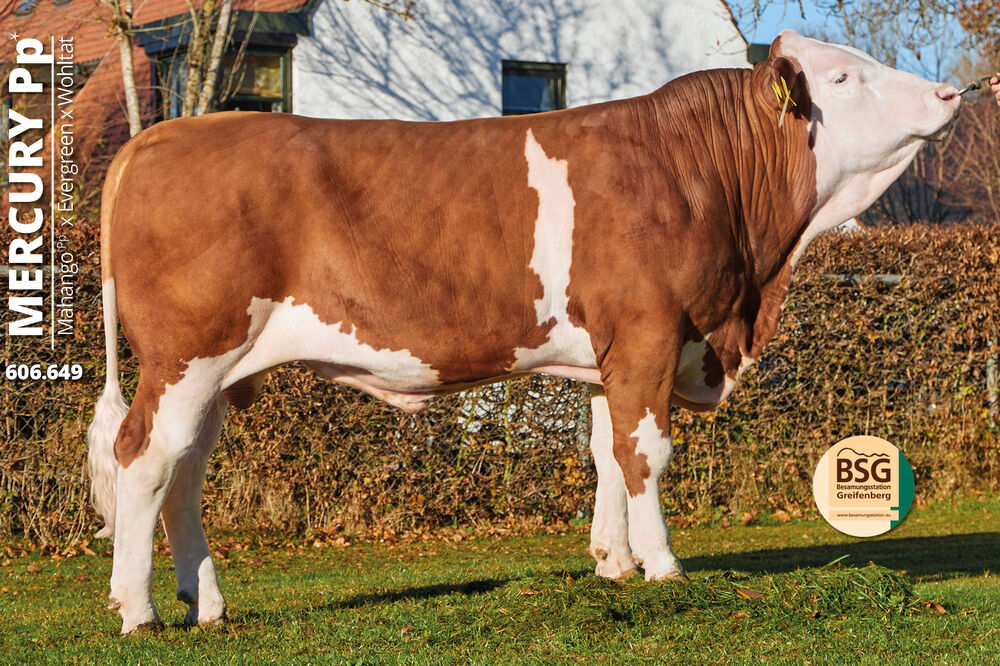 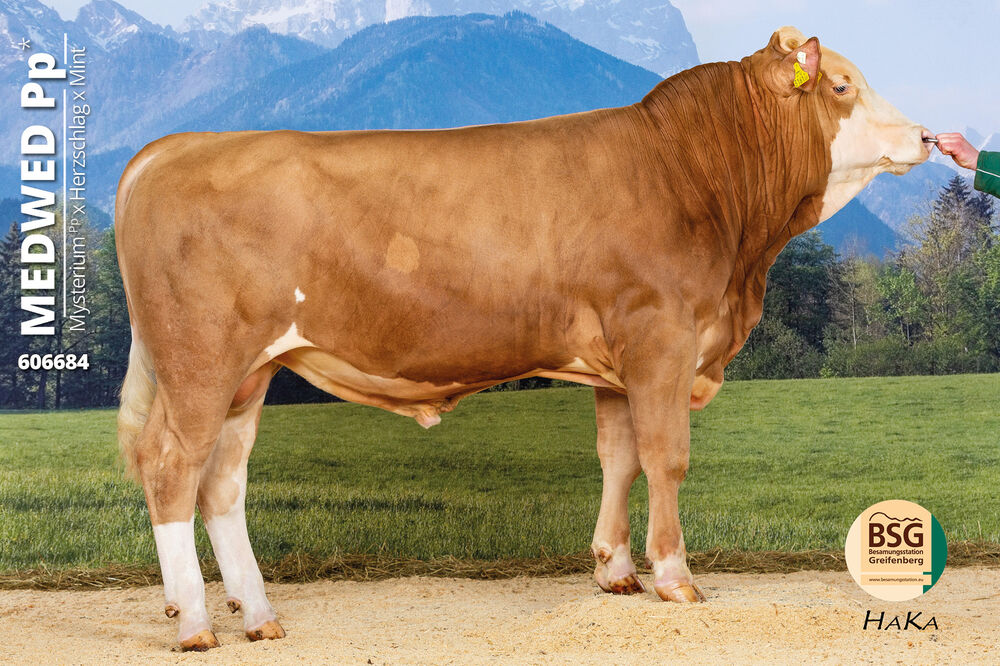 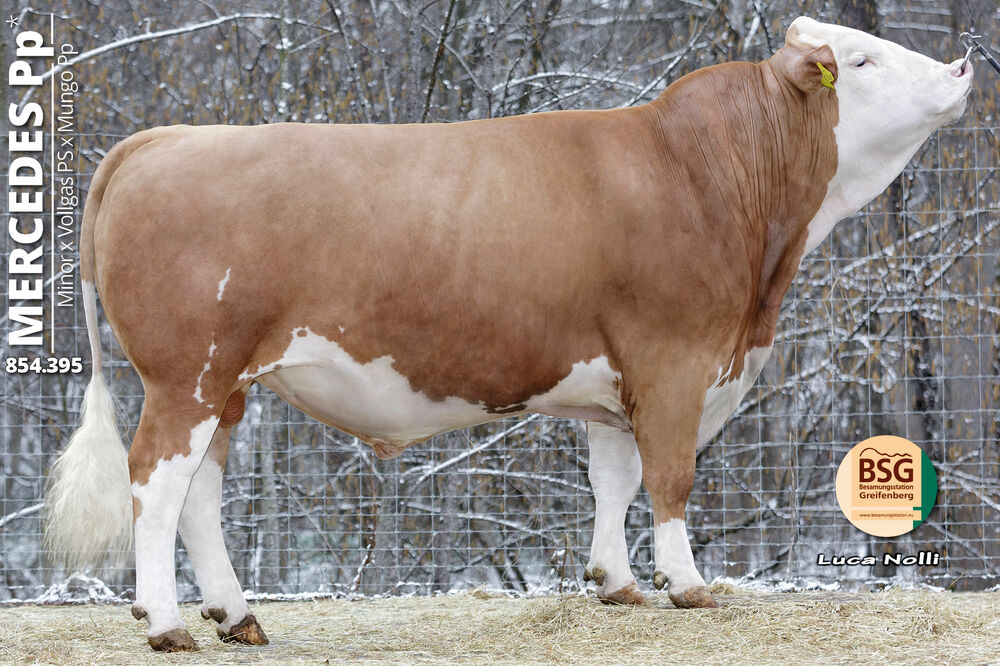 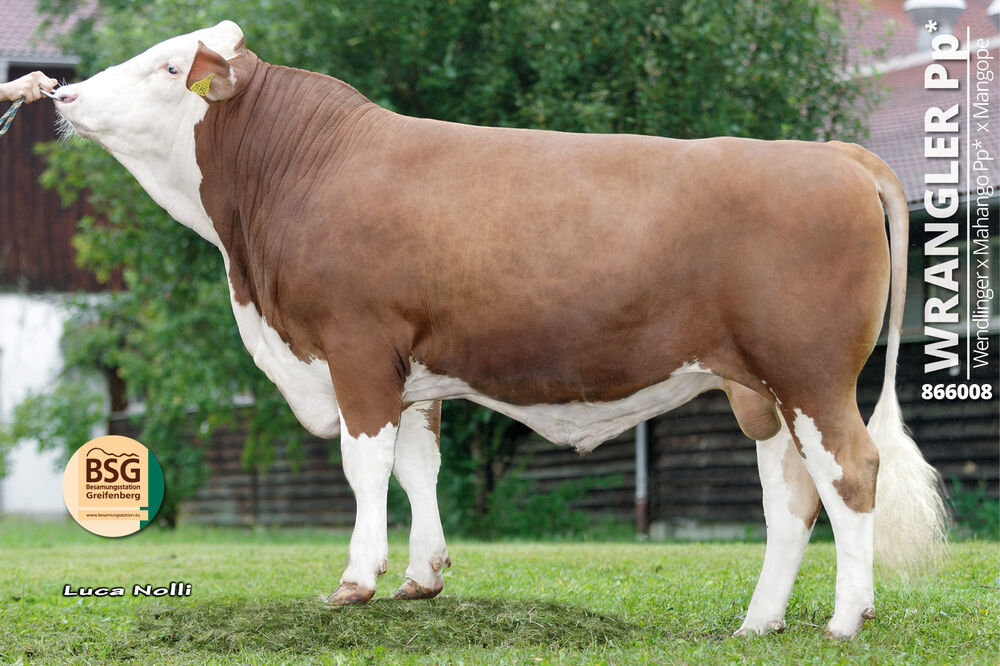 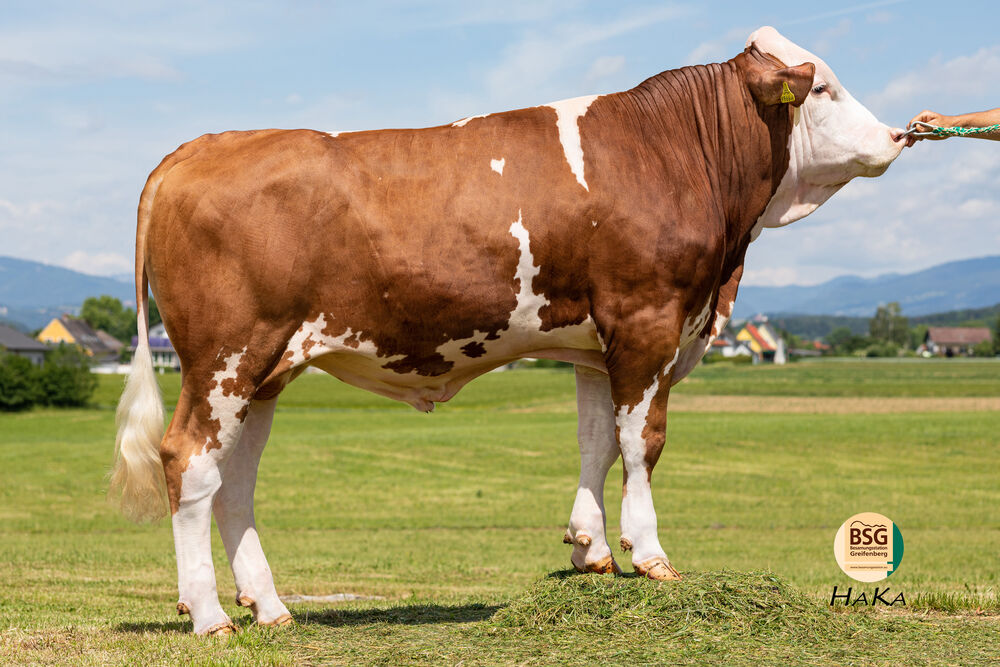 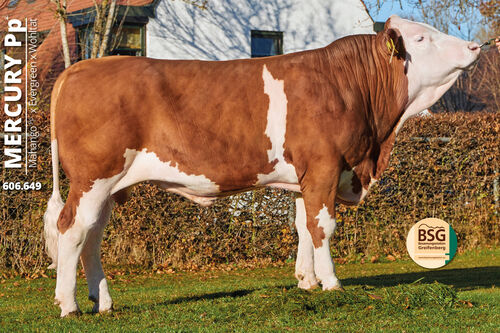 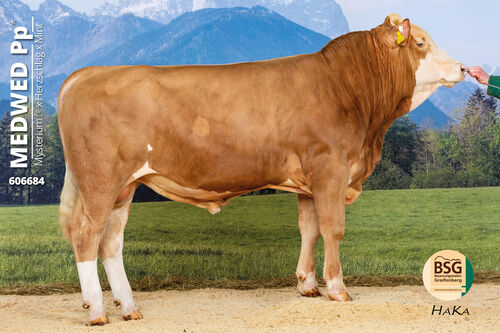 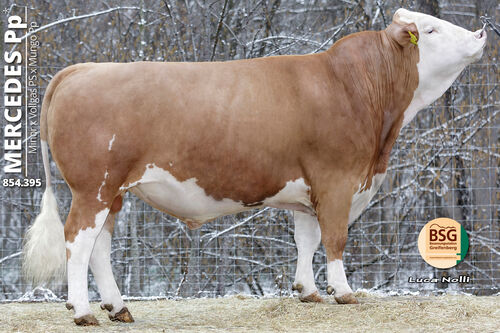 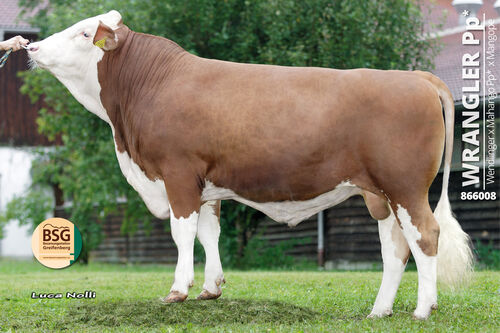 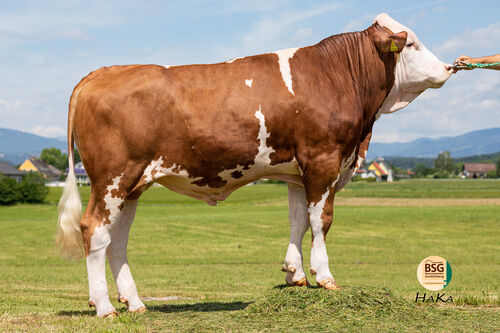 The top position is taken by the exceptional bull MERCURY Pp* who proves once again that naturally hornless bulls are more than competitive. The late Mahango Pp*-son Mercury Pp* is out of the Evergreen-daughter Anni, who produced her first lactation on an extensive pasture farm. Via the bulls Wohltat, Vanstein, Safir and Horb this Fleckvieh cow family goes back to the well-known show farm Eichberger, St. Margarethen. So it is not surprising that Mercury Pp* not only inspires with appealing performance and fitness breeding values, but also lets us expect physical Fleckvieh animals with a strong feet&legs and udder quality in the perfext dual purpose type.

With Mysterium Pp*-son MEDWED P*S the polled Fleckvieh giant Manolo Pp* already starts into the next but one generation without losing quality. With the top-sellers Herzschlag and Mint in the next generation, Medwed P*S is expected to have a high willingness to perform, scarce ingredients and an outstanding conformation with small-volume, high-attached udders. The well known bulls WEGA Pp*, WRANGLER Pp*, HERANGO Pp* and the conformation specialist MERCEDES Pp* complete the high-quality range of polled Fleckvieh sires.

The line-up of young Fleckvieh sires is also broad, with ESPRESSO on the top spot with 140 GZW and already enjoying great popularity before Single-Step. Espresso goes back to the exceptional cow and Vanstein-daughter Livana, who has a lifetime production of more than 80,000 kg, via the extremely productive Herzog-daughter Lavazza. The numerous direct offspring of Livana inspire with uniformity, willingness to perform and top conformation. In the fitness traits Espresso scores with best udder health and fertility. Espresso is available with sexed semen.

Midwest x Varta x Wohltat x Rumgo x Round up is the alternative pedigree of MIDWAY. His balanced genomic breeding values are characterised by the excellent udder composite, the high performance disposition as well as the good beef performance. Midway comes from a cow family that is intensively used for breeding, and so not only his dam Peru inspires at the breeding farm with her high willingness to perform, with the best conformation, but also numerous aunts. Peru's own appearance is clearly visible in Midway's breeding values. She shows a slightly more angulated rear leg and an enormously high and strong attached udder. 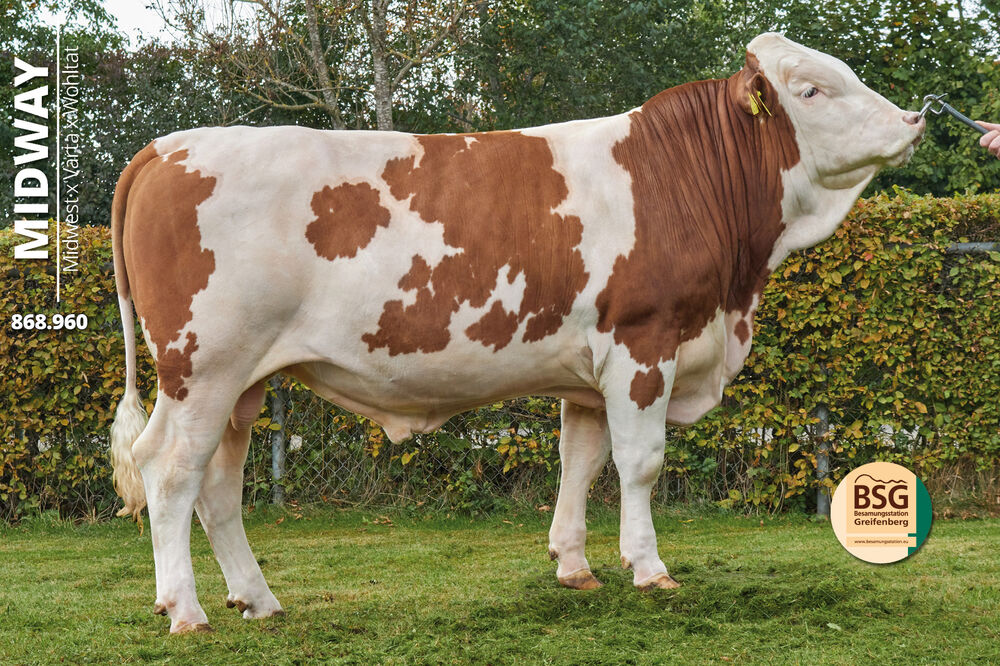 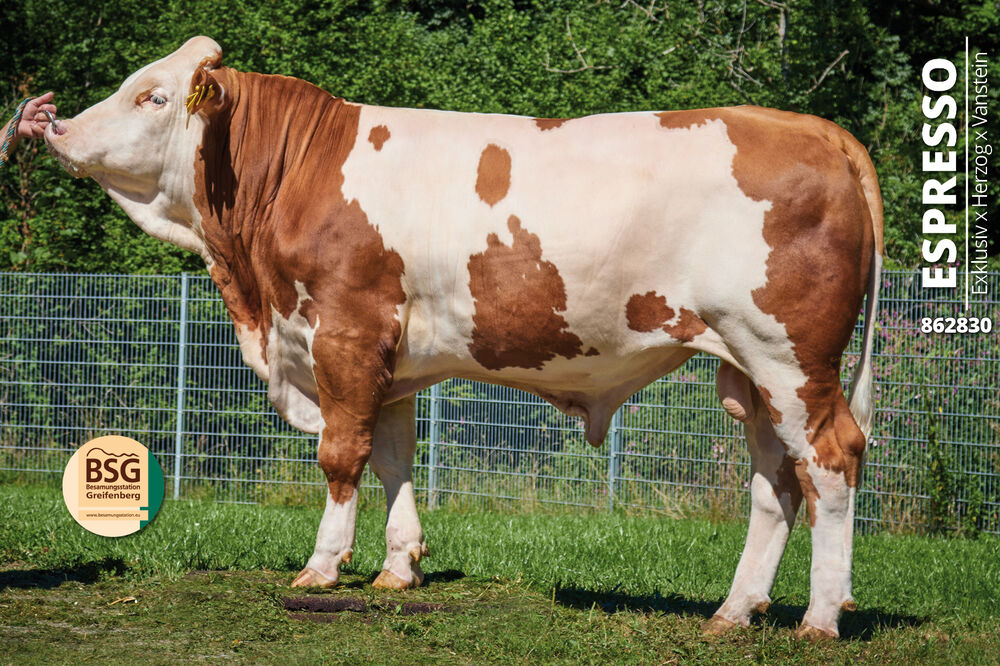 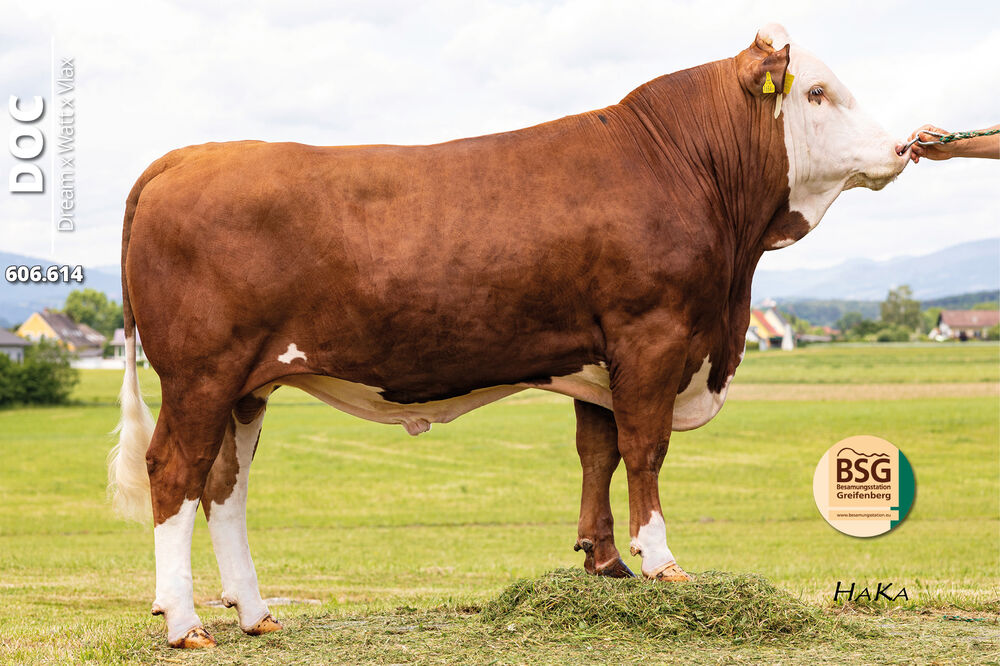 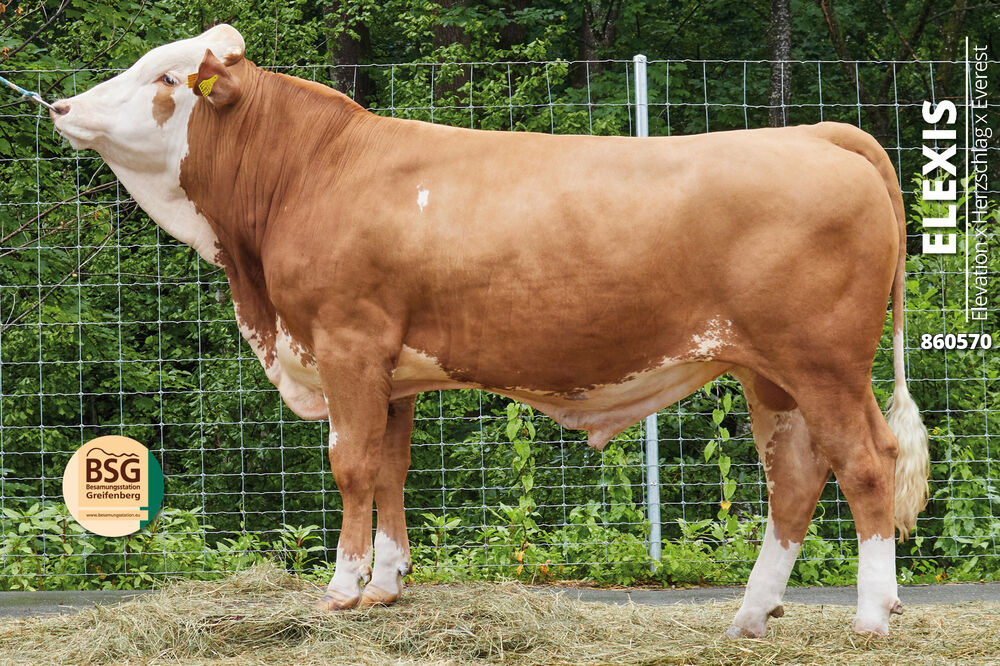 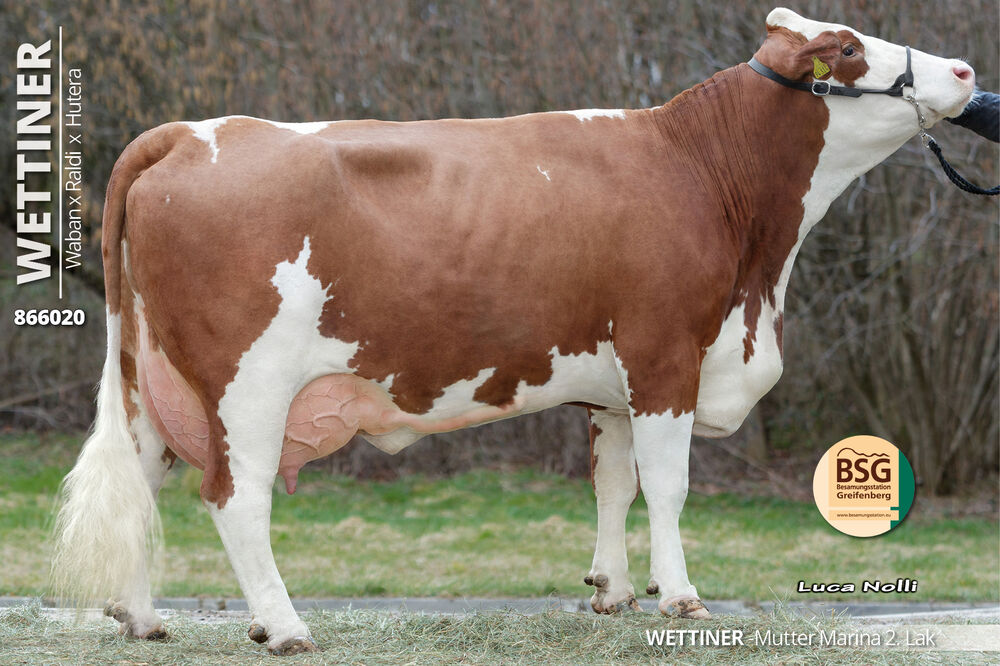 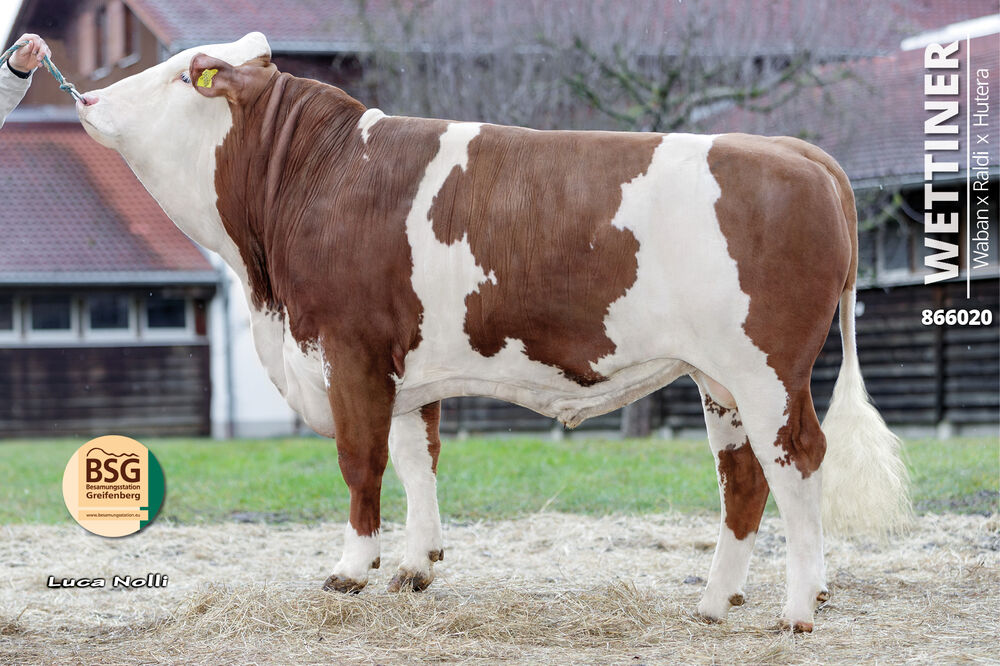 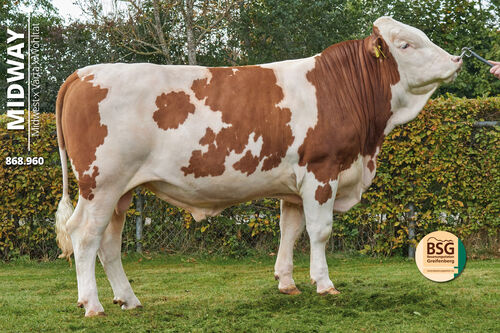 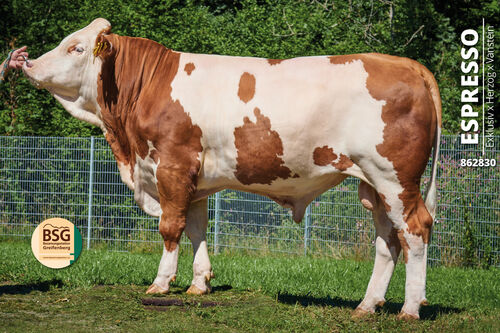 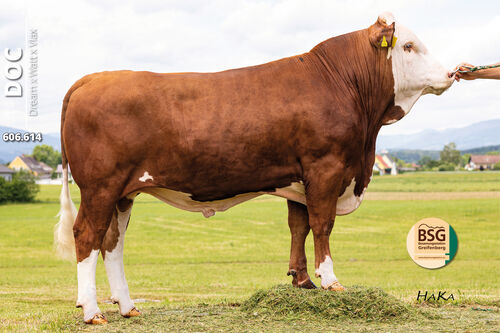 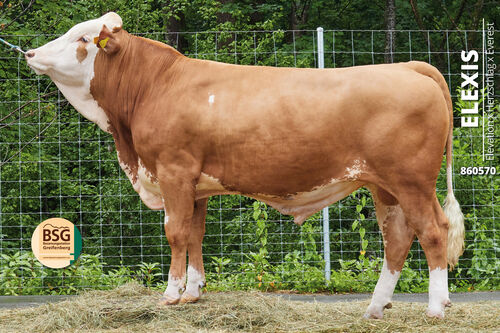 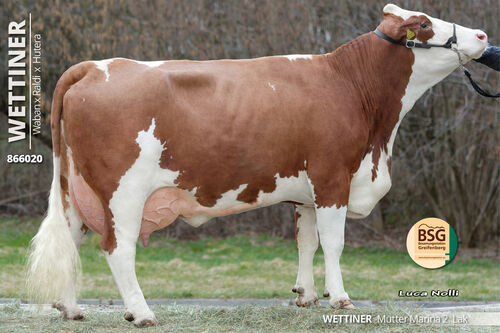 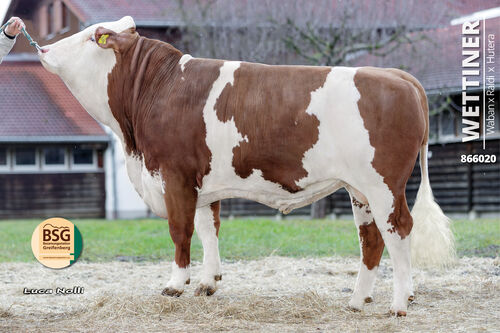 Your farms and your health are very important for us, thats`s why the events planned for August, such as the Fleckvieh and Brown Swiss regulars bull presentation, will be cancelled. As we still want to provide you with the best possible information about current events in cattle breeding, we would like to take this opportunity to refer you to our new homepage, which has been equipped with many practical functions such as the search for bulls suitable for AMS. On www.besamungsstation.eu you will find under the menu item "News" current topics around cattle breeding.

Since we have always a selection of bulls for our regional farmers after the sire proof run the list ist reduced. The additional list of the BSG bull can be found here:"Fleckvieh Archive"