Even in these extraordinary and demanding times you can rely on us, the Insemination Station Greifenberg, as a supplier of the best progeny tested and genomic Fleckvieh genetics. High quality and as extensive as never before, is the range of Fleckvieh bulls we offer you for the coming months.

Despite the basic adjustments of -1.4 points in the GZW and -1.2 points in the MW, the majority of the bulls could confirm or even increase their breeding values.

In the range of the daughter tested bulls, the heterozygous polled MANOLO Pp* can further underline his position as an exceptional sire of the Fleckvieh breed. He rises again in the TMI by +3 points to 131 points and is now at the top of all daughter proven polled Fleckvieh bulls. 145 daughters have meanwhile completed the first 100 days and convince with their willingness to perform with below average ingredients (+702kg ZW milk). Even if Manolo Pp* passes on a scarcer milking speed, his daughters inspire with an excellent udder health (124) and longevity (124). Since the December sire proofs, 90 more daughters with type evaluation have been included in the breeding values, and give Manolo Pp* further lift in the type traits – 9 points in feet&legs and six points in udder composite. With 120 for frame, 111 for muscling, an amazing 131 for feet&legs and a strong 118 for udder he leaves nothing to be desired. Large-framed, Fleckvieh type cows with flawless, dry feet&legs and highly attached udders of best quality are part of the Manolo Pp* program and enrich every dairy herd. The calving breeding values of Manolo Pp* are already secured by almost 14,000 calves and confirm him with very easy calvings as the perfect choice for heifer inseminations.

Fleckvieh from Greifenberg - three top newcomers on the Fleckviehlist

If you want to breed type strong, functional cows, you should take good note of the three new names in the lineup of the BSG progeny-tested Fleckvieh sires. With TMI 123 and Milk index 116, Hutera's son HOOD, out of the National champion Humid daughter Bluna, is a newcomer. His daughters already attracted attention in advance due to their appearance and high level of performance. 39 evaluated daughters draw the picture of the large-framed Fleckvieh cow with a lot of depth and width (frame 122), with functional feet&legs (F&L 102) and high and firmly attached, well textured udders (udder 113). The not too extreme teat position in combination with the optimal teat formation allows the use of Hood especially for robotic milking farms. The enormous beef value of 126 points rounds off the total package of our Fleckvieh bull Hood.

Like Hood, Reumut son VERNANDO has a well-known show diva for his dam. He is out of the Everest-daughter Roleva, who was Champion of the young cows at the VFR animal show 2015. Also Vernando's first daughters attract attention. Vernando- Kathmandu could win first show laurels for her sire as the maiden heifer champion of the young breeders Night-Show in Wertingen 2020. With TMI 123 (+3) and Milk index 113 (+1) Vernando enters the segment of daughter tested. The 24 daughters evaluated in conformation already brought him gains in all sub-areas, so Vernando can now be called of the top udder sires (126) of the Fleckvieh breed. Vernando daughters show a harmonic, well-balanced body, with taut, somewhat steeper feet&legs. The udders are very well attached and show a clear central ligament (117). The teats are optimally formed and, as is typical for a Reumut son, placed far inside. The only drop of bitterness is the heavier calvings. For this reason, Vernando is also available on female sexed and should be solely used on cows.

High-attached, strong udders with robot-suitable teats are the trademark of the heterozygous polled Vollbut Pp-son VOLVO P*S, who is entering the current breeding value estimation with TMI 116 (+2) and Milk index 112 (+2). With the sire line Vollbut P x Wal x Romel x Randy he is definitely THE alternative line in the polled Fleckvieh program and already with 68 daughters in the test milkings he is secured. Volvo P*S-daughters show a lot a frame and depth, functional feet&legs (104) and strong udders (121). Volvo P*S comes from a long-lasting cow family. Mother Rivalin has 7 calves and a lifetime production of almost 63.000kg milk, his grandmother Rivanna even convinces with a lifetime production of over 100.000kg milk. So, it is hardly surprising that Volvo P*S with a productive life index of 110 points also promises an improvement in this area.

With TMI 126 (+1) and Milk index (+1) MONTELINO is still the Manton son with the highest breeding value. He has already completed 125 first lactations, certifying that his daughters are extremely willing to perform. With his milk performance of +1,361kg Montelino still ranks 3rd of all daughter tested Fleckvieh bulls. In spite of the high performances, the Montelino daughters show a flat lactation curve (Pers 112, +9) in connection with a reasonable lifespan (ND 106, +1).

Willingness to perform, top components, udder composite are the three keywords which describe the Reumut-son VERMEER F5C most simply. Despite high willingness to perform (+822kg ZW-milk) his daughters become well pregnant again (fertility value 110, +8). These traits are probably responsible for the increase in Milk index +2 (127) and Total merit index +4 (125). Vermeer has already 2049 daughters in milk, which are included in the breeding value estimation.

After a short break, Hurrican son HICKS F2C is also back in the ranking. He too can increase his breeding values slightly and is now in the Fleckvieh list with TMI 120 (+2) and Milk index 119 (+2). Regarding udder health (EGW 120) and persistence (117) Hicks leaves nothing to be desired and combines it with an attractive performance heredity. His deep ribbed daughters show somewhat steeper, coarser hocks. The optimally formed teats also recommend Hicks as a pefect choice for use in robot milking farms.

Manigo-son and udder specialist MAGIER had to accept a slight loss of breeding values. But with an udder breeding value of 139 (+3) points he ist still the Fleckvieh bull for exceptional udders with top fitness. The fertile Magier daughters impress with excellent udder health and long lifespan.

Such successes are only possible through the consistent use of young genetics. For this reason, the current range of young sires includes many Fleckvieh bulls from a wide variety of bloodlines, with different hereditary focuses. It is of particular concern to us that these selected young bulls come from convincing cow families with strong mothers. The latest successes prove us right, especially in the exterior inheritance, with Manolo Pp*, Hood, Vernando and Volvo P*S as impressive examples!

With MYSTERIUM Pp*, MERCEDES Pp* and WRANGLER Pp* the Fleckvieh triumvirate remains with the naturally polled young sires. With a udder breeding value of 128 points, the polled Hut Ab son HUTLAND Pp* shines. Like Mercedes Pp*, HUTLAND Pp* has an alternative bloodline and, thanks to Milking speed 109, is ideally suited for mating to the current Fleckvieh population.

With 1900 calvings, the calving values of MAESTRO Pp* have been confirmed in the meantime and show a positive tendency, thus we can recommend him for heifer inseminations as well. His 100%polled and as well easy calving half-brother MAYBACH PP* remains in the recommendation.

Numerous new names enrich the range of the horned young Fleckvieh sires. New on the BSG list is the Waban son WETTINER, who was bred from a more than convincing Müldorf cow family. Currently four generations are milking on the farm and show impressively the qualities of the Fleckvieh breed. Wettiner's breeding values also indicate fitness-strong (122) animals with high performance (MW 127) and attractive udders (119). With his TMI of 136 Wettiner is one of the two sons of Waban with the highest breeding values.

Especially EMERALD inspires with a Hutera-free pedigree and can still shine with top breeding values for fitness and conformation. His mother Koala brings it already in the first lactation on nearly 12.000kg milk with strong 3,89% protein, and comes from the cow family von Hubraum. Despite her high performance she knows how to inspire with a small volume, well attached udder. These characteristics are also reflected in the breeding pattern of Emerald, who combines a high-performance disposition with excellent type quality.

Hugoboss son HEXAGON offers with more than +100kgs milk outstanding performance figures, whose other strengths are probably the flat lactation curve (Pers 125), milkability (119) and longevity (114). In the type traits, Hexagon lets you expect rather medium-framed, well-muscled animals with tight, correctly angled feet&legs. The long udders should be well attached and teat development and placement perfect for robotic milking systems.

To the breedings values of WETTINER, EMERALD and HEXAGON

Since we have always a selection of bulls for our regional farmers after the sire proof run the list ist reduced. The full list of the BSG bull can be found here: 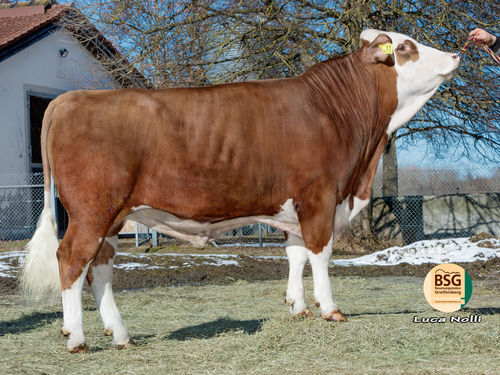 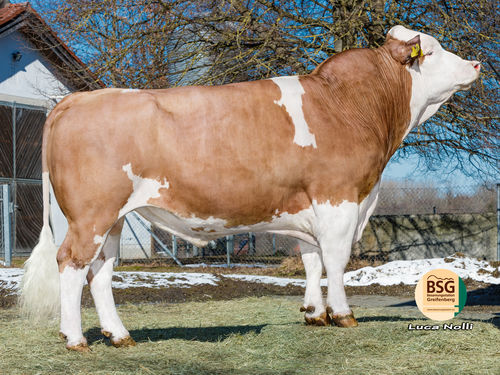 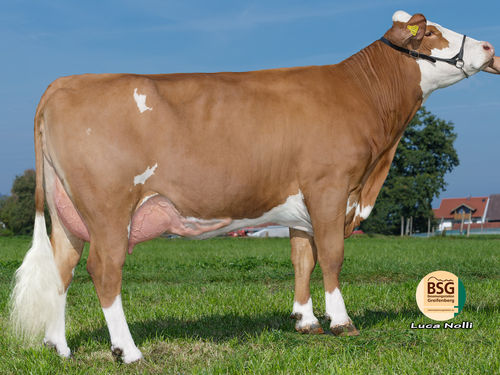 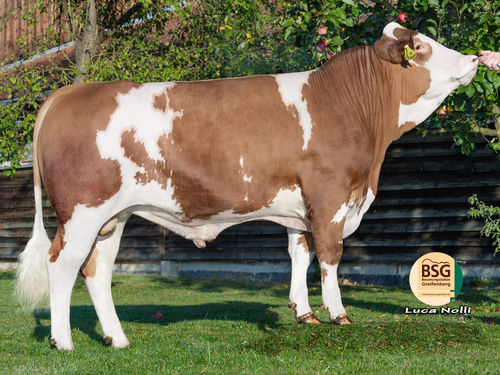 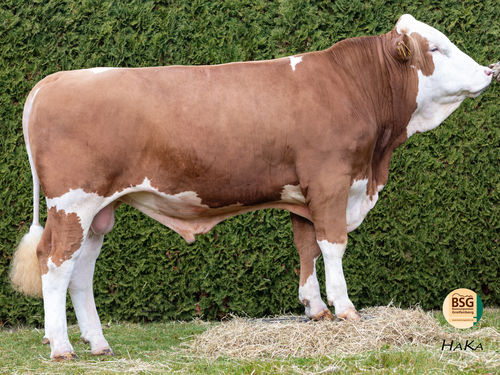 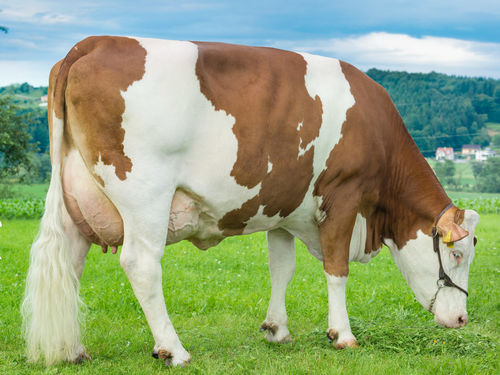 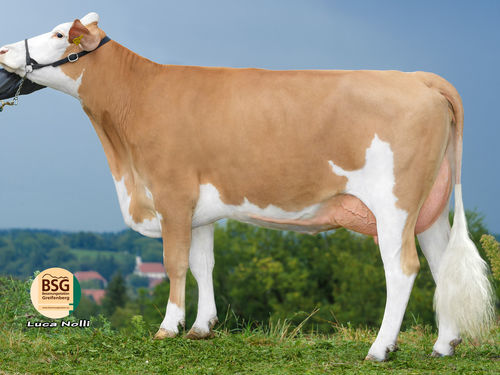